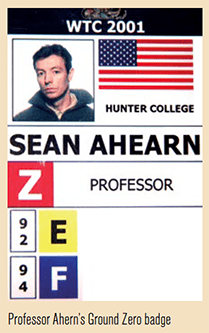 Rarely does a single event help both to transform the value and use of a technology. The World Trade Center (WTC) Disaster was one of those events. What started out as an exclusive technology known to a few and used primarily by experts in the mapping sciences discipline, ended up playing a critical role in almost every aspect of the WTC disaster recovery. Firemen who had never worked a computer were using some of the most advanced mapping technologies ever deployed to log the location of victims and equipment found on the “pile”. They would rely on images produced from an airborne laser-measuring device for command and control at Ground Zero. Building inspectors who had previously depended on paper and pencil to do their inspections were wirelessly tapping into one of the world’s largest urban geographic databases (NYCMap) to retrieve and send the geographic and inspection information of damaged buildings. The immediacy of the moment would drive the innovation necessary to make these developments possible. As the City of New York struggled to respond to this event, NYCMap, the geographic base-map of New York City, that was created in the late 90s in a collaboration between, the City of New York’s Department of Environmental Protection, led by Alan Leidner and Wendy Dorf, the Center for Advanced Research of Spatial Information (CARSI) at Hunter College and the mapping company Sanborn, would prove to be an organizing force that would aid the emergency staff in directing their workers, helping the firemen assess the damage and monitor the changes at “ground zero” and assist the City Managers in determining the extent and location of damage to the City’s infrastructure. An array of geo-spatial technologies: Geographic Information Systems (GIS), Remote Sensing Instruments, and Global Positioning Systems (GPS) would be deployed in the response to this unprecedented crisis in American History.

“When all your landmarks and points of reference have been destroyed, you’re lost.” Said David Litvin of the FDNY’s Phoenix Mapping Unit in describing the situation on the ground shortly after September 11th. A lack of orientation combined with the smoldering fires that shrouded the site in smoke made assessment of the damage incurred in the sixteen-acre World Trade Center site impossible. Firemen and rescue workers could see parts of the site, but it was like feeling parts of an elephant without seeing the whole. The heat was so intense on the “pile” (i.e. the smoldering 16 acre site of “ground zero”) that the firemen’s boots began to melt when they stood in one location too long. Knowing where it was hot and where it was not became a necessity for the workers on the pile. Having a detailed map of the hot spots would greatly expedite the extinguishing of the fires by providing guidance as to where to place their water hoses. Thermal scanners that detect “heat” were deployed as part of the airborne suite of sensors that I ordered on the morning of September 12 while on a call with EarthData and the State of New York Emergency Management Director, Bruce Oswald. The resulting images gave the rescue workers the first look at the spatial distribution of the hot spots on the pile and which sites to avoid and which needed water. These maps were updated daily to provide the firemen with information on changes in the location of these “hot spots”. 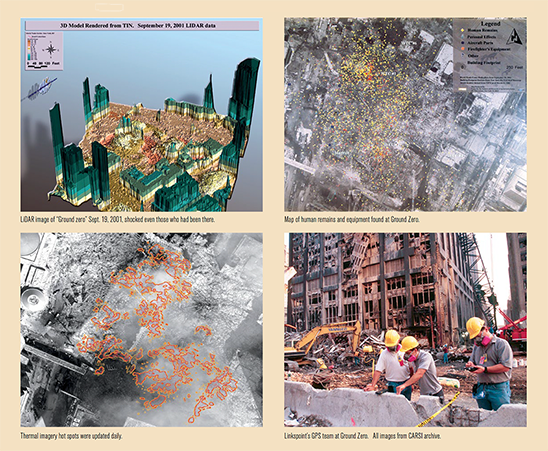 There was total silence as firemen watched the map being unfurled onto the Pier 92 floor; it was huge, measuring four feet by five feet. They moved in tighter until they were shoulder to shoulder. Its vibrant colors seemed to reflect off their faces. One squatted down to get a little bit closer. They had all been down there, but they’d never seen anything like this map before. Suddenly their demeanor changed, and the connection between map and reality surged in their minds. “I was on that mound yesterday”, said one. “My guys are working over there”, said another. “I wondered what was on the other side of that structure”, interjected a third. “Look at the Customs Building, there is a huge pit in the center”, exclaimed another. It was the first clear image of the site, and the nature and extent of the damage shocked even the men who were working there every day. They had all seen the smoke-obscured early Orthophotographs. But because the laser used penetrated the smoke it was their first comprehensive understanding of what had happened. The image would later come to epitomize the extraordinary destruction at WTC site and would appear in publications around the world. More importantly the image would be the focal point of the Command Center at the Duane Street Fire House and a key reference for discussions of logistics at Ground Zero.

Firemen were using a hand-draw grid to fix the location of human remains and equipment found the “pile” and a paper and pen to log information. The process was inefficient, error- prone and inaccurate. A new solution was the GPS application that changed the way the firemen collected forensic information on the site enhancing the location accuracy and the time to record the information. A team at Linkspoint Inc. designed the system to include a hand-held computer with a bar-code scanner and GPS plug-in (which didn’t exist 20 years ago) to perform the whole process: placing the remains in a medical bag, scanning a bar code on the bag, and gathering the location and time, in less than a minute. The results, mapped in space and time, were used for forensic analysis.

There were several additional impressive applications developed. What really stood out during this whole period was the power of the collaboration between government, academia and industry to solve these complex problems and organize the response and recovery effort. Companies like Environmental Systems Research Institute (ESRI) played a key role in implementing GIS technology and staffing the 24×7 Mapping and Data operation at Pier-92, managed by NYC’s GIS director Alan Leidner, The City Agencies of New York demonstrated the breadth and depth of their expertise and adaptability in response to this unprecedented crisis and Hunter College led by the CARSI lab in collaboration with Linkspoint and IBM, injected key geo-spatial technological solutions to solve some of the most pressing problems confronted during the recovery effort. The NYC administration’s understanding of the potential for Geo-spatial technologies of GIS, remote sensing, and GPS fundamentally changed with this event, not just for its value in responding to emergencies, but for managing the complexities of a city like New York on an everyday basis.

Check out Esri’s Blog on “A Look Back: How a GIS Team Guided Response and Recovery After 9/11” published on September 10, 2021 by Ryan Lanclos and David LaShell.

Two decades ago, cutting-edge geospatial tools were deployed by professionals in the response and recovery efforts following the 9/11 terrorist attacks, and lessons learned are still guiding software advancements.

Professor Sean C. Ahearn participated in the “Geospatial Needs for a Pandemic-Resilient World_Agenda” June 17, 2020, hosted by the National Academies of Science

His position paper along with those of the other invited guests can be found at http://spatial.ucsb.edu/2019/spatial-data-science-symposium/participants

Sean C. Ahearn has been invited to present “Tiger Sustainability: Movement, Interaction and Human Impact in Thailand and Myanmar” at The Explorers Club  in NYC on June 11, 2018.

Sean C. Ahearn spoke at The Future of GIS in NYC forum scheduled at the Roosevelt House Public Policy Institute at Hunter College, April 23, 2018.  His topic was the History of GIS in NYC.

Sustainable CUNY’s 11th annual NY Solar+Storage Summit will take place on June 21, 2017 at John Jay College. We will be announcing our new solar map for Long Island at the Summit. Anyone living on Long Island, the Five Boroughs or Westchester can now just put in their address and get their solar potential ( https://www.nysolarmap.com ).

Sean C. Ahearn spoke at the NSF Mobility workshop scheduled at the Ohio State University, May 11-12, 2017.  His topic was Patrolling Behavior of Tigers and Geographic Context. 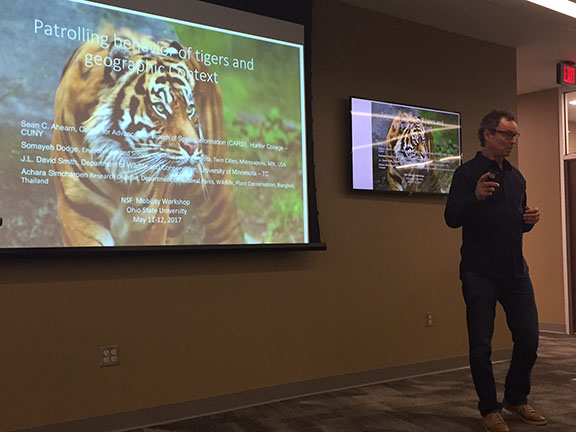 Sean C. Ahearn presented at the Schloss Dagstuhl Seminar “From Observations to Prediction of Movement” on July 9-14, 2017 in Saarbrücken, German. 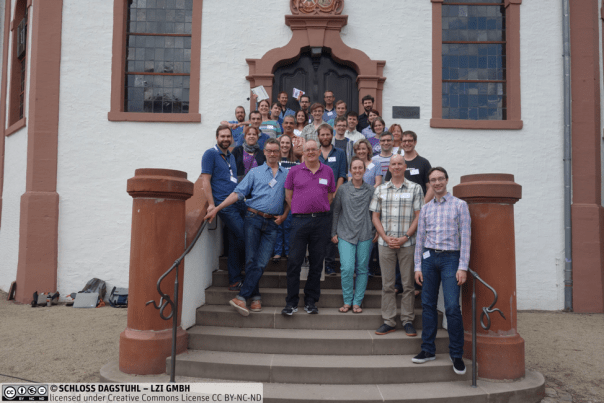